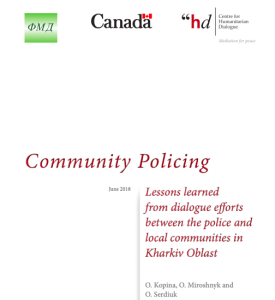 Ukraine has faced a challenging and controversial process of state reforms in recent years. This guide deals with just one aspect of this. Community policing is a process of developing engagement between the community and the police through cooperation to make the community more safe, tolerant and self-sufficient. Community policing is common to two differ- ent reform processes started in parallel but without coordination or cooperation to share results. First, a process of decentralisation has established amalgamated territorial communities. Second, overall police reform has aimed to bring a new philosophy into the work of the police by facilitating the transition from ‘punishing’ to cooperating with the community on the basis of openness and transparency.

Our aim in the project reported here was to develop a model of cooperation between the police and local people in one of the newly created amalgamated territorial communities: Nova Vodolaha, within Kharkiv Oblast. The project was especially challenging initially because there was no structure for coordination between different branches of government, the police and the public. Everyone was busy doing their own jobs, in relative isolation, and there was no joint action plan on developing a safe and sustainable community. We felt that it was necessary to develop engagement and trilateral cooperation between the authorities, the community and the police, through the key mechanism of dialogue. This methodological guide details the development of this engagement and cooperation.